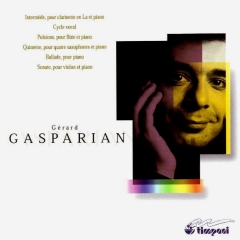 «Gérard Gasparian is well-known as a concert pianist, and as a fine exponent of chamber music. Hence it's not surprising, perhaps, that his music is so rich in associations and hints of other composers. At the same time, there is a distinctive voice in the process of emerging, though he is just 42. Give him time!

The first work on the disc, Intermède for clarinet and piano, is a good introduction to the lively qualities of his work, as well as to the high standards of music-making to be heard here. The piece begins with manic and rather fragmented music, which gives way from time to time to more easily perceived melodic and rhythmic shapes. The alternation of wildly energetic music and more gently flowing passages brings to mind Poulenc, as do some of the motoric piano textures. But the Poulenc connection could be misleading, as there is none of that kind of wit or charm. This is very earnest, rather humourless, music.

This applies to the Song Cycle which follows - settings of German poetry by Mörike. Kobayashi, ably accompanied by the composer, sings these difficult songs with great understanding. The ending of the second, Nimmersatte Liebe (Insatiable Love) has a striking use of vibrato-less tone, and throughout, the singer's intonation is unfailingly true and centred, her voice firm and expressive.

Pulsions for flute and piano, begins with some of the fragmented type of music heard in the clarinet Intermède. This is a fascinating piece, with aleatoric episodes in the central section, and intricate interplay between the two instruments.

For me, the most interesting work on the disc, however, was the Quintet for 4 saxophones and piano of 1997. The saxophone repertoire has been steadily widening and deepening over the past fifty years, and there are now many fine examples not only of solo works, but also of those bringing together the different members of this big family of instruments. The way Gasparian combines the four saxes with the piano is imaginative and resourceful, in that he certainly doesn't look upon the latter as a mere accompanying instrument. In fact it doesn't appear until the second movement, the strangely mechanical Canon, fanfares, which, for me, brought to mind Ligeti at the outset. Throughout, there are delicious textures, and strong contrast and changes of mood. Though staggeringly difficult to bring off, this work is given a superbly confident performance by the Ledieu Quartet, including their heavy breathing at the very end!

This fine issue is completed by the splendid piano Ballade, and the Violin Sonata. Recording quality is very good, apart from one strange moment of distortion in the Song Cycle. If you haven't encountered this interesting and talented young French composer, this disc makes an excellent entrée»
Gwyn Parry Jones - LudwigVanWeb , 2002

Pulsions for flute and piano, an homage to Donatoni, develops other approaches including even random ones; its "concentric" writing is well constructed. The Quintet seems to me the major piece on this record, an almost pleasant and playful example of the influence of electroacoustic music and of serialism... The performers support perfectly well this sincere music, that shows an undisputable craft. »
Stéphane Friederich, 5/5 Classica - May 2002

« His Intermezzo for clarinet and piano, opening this first monographic recording, reflects the lively and consonant character of his music, guided by the popular musics rhythms.  This colourful writing can still be found in Pulsions, five years later, in the skilful contrast that shapes the singing flute of Emmanuelle Ophèle and the jolting piano of Hideki Nagano. A ductile serialism  guides the exuberant conversation of a saxophone quartet and a piano, in the concise and elegant forms of the Quintet...»
Franck Mallet, Le Monde de la Musique (3***) - April 2003

«The composer lives in a borderless territory, and he occupies, depending on the works, this region or another... he remains himself, adopting, along his way, a variety of languages that seldom can be found written by the same pen. »
Jacques Bonnaure, La Lettre du Musicien - January 2002

«His Ballad for piano (1988), with its somewhat post-romantic climate, is - according to our taste - one of the most genuinely felt. It successfully unites the memory of a "Rachmaninovian" orientalism with a clearly more contemporary pianistic form. His Vocal Cycle based on poems of Mörike is very appealing too, with its reminiscences of serialism. The whole record is performed with much conviction by soloists to whom these pieces are often dedicated. The parts of piano - the omnipresent instrument - benefit from the presence of the composer himself, an obvious virtuoso, and this enriches its use, even as an instrument of accompaniment.»
Alfred Caron, Ecouter voir - April 2002

«Gérard Gasparian vividly shelves as a rearguard combat the conflict that has been fought until then in the matter of contemporary music, opponing a hermetic, scholarly, experimental music, often the heir to all the vanguard languages that went over the twentieth century, to easier and willingly lyrical modes of expression, and so more accessible to a larger music loving general public. Taking the opposite view of this dispute, he succeeds in this exploit not to yield neither to academism nor to modernity, and achieves an original work, that "melodiously" reconciles the two rival schools.»
Raphaël Bagdassarian, France Arménie - December 2001

« An astonishing first CD recording... He plays with sounds as we do with light: he casts and diffracts the musical themes into a multiplicity of small sonic cells: dramatic falls, jolts, curls and whirls in which piano is used as a percussion instrument. G. Gasparian so escapes the temptation of the ever-newness as well as of the comfort of academism, and he doesn't deprive himself, as he goes past,  of some romantic accents. »
Nouvelles d'Arménie - December 2001

«The Intermezzo for saxophone and piano of Gérard Gasparian, a keen and striking energy...»
<La Provence - September 1999